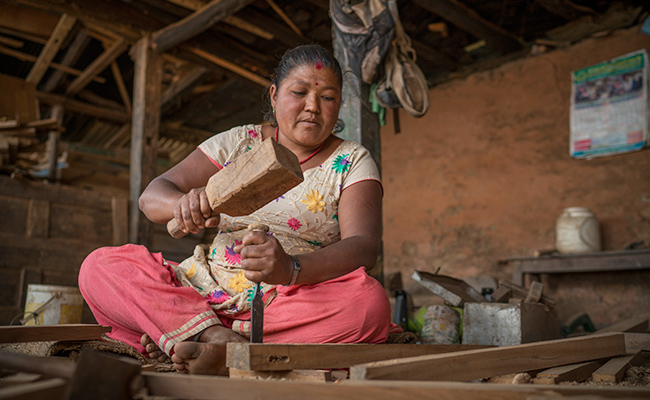 Shanta Shrestha works to rebuild and help her local community.

One year on from one of the worst natural disasters in Nepal’s history, the UK public has donated £87 million to the DEC Nepal appeal helping 13 of the UK’s leading aid agencies to reach more than 1.6 million people with relief.

However, while overall 83 percent of affected families have received some sort of shelter support to help repair or rebuild their damaged homes, agencies are concerned that reconstruction of permanent housing is yet to start in earnest and the National Reconstruction Authority has said that homes will not be rebuilt before the monsoon in June.

To help provide a transitional solution, DEC agencies have trained 180 masons and provided 67,000 shelter kits to some of the 893,000 families whose homes were destroyed or damaged in the quake.

“One year on from Nepal’s worst natural disaster in decades, we can be proud of how much has been achieved across some of the worst-hit remote parts of the country. Lives were saved through clean water, emergency shelter and healthcare.

“The past year has not been easy for survivors and at times aid workers have had to struggle to provide people with the help they need. Member agency staff and partners have hiked for up to two days, hired mules, tractors and helicopters in order to get shelter supplies, food and hygiene equipment to remote mountain villages. Now the even tougher task of rebuilding shattered homes and rejuvenating lost incomes is getting underway. We will continue to work with local carpenters, business people and Nepali organisations to rebuild for years to come.”

As the emergency moves from immediate relief to long-term recovery, there is still a great deal of work to be done. As many as 26,000 people remain displaced from their homes – down from 117,000 people following the quake – and the government’s plans for rebuilding are far behind schedule.

Member agencies have voiced concern that the poorest and most marginalised in Nepal are missing out on the proposed rebuilding grant because they don’t have the paperwork required. They also argue the planned government loan of approximately £1000 to help those who have lost their homes is not enough to cover the costs of repairs.

DEC members are calling for reconstruction and resettlement to be inclusive of women, those who are landless, older people, and other marginalised groups, alongside their work on the ground.

Some agencies are paying people from communities affected by the quake to help the recovery effort and provide families with an income. For example in Dakchinkali, women are repairing an irrigation canal, helping the land withstand heavy rain in preparation of the monsoon season.

A new DEC update Nepal Earthquake Appeal: One year on – highlights include:

The DEC itself raised £52 million towards the £87 million final total of the Nepal Earthquake Appeal, with our member agencies raising a further £32 million directly as part of the appeal. We are grateful to the Department for International Development for £5 million in UK Aid Match, which helped boost early donations from the public and is included in the £52 million raised by the DEC.

See the key moments of the Nepal earthquake, the DEC appeal and the aid operation in Aftershock.