Here are some of the ways the £41 million raised by the DEC's appeal is helping people across Mozambique, Malawi and Zimbabwe whose lives were devastated by Cyclone Idai. 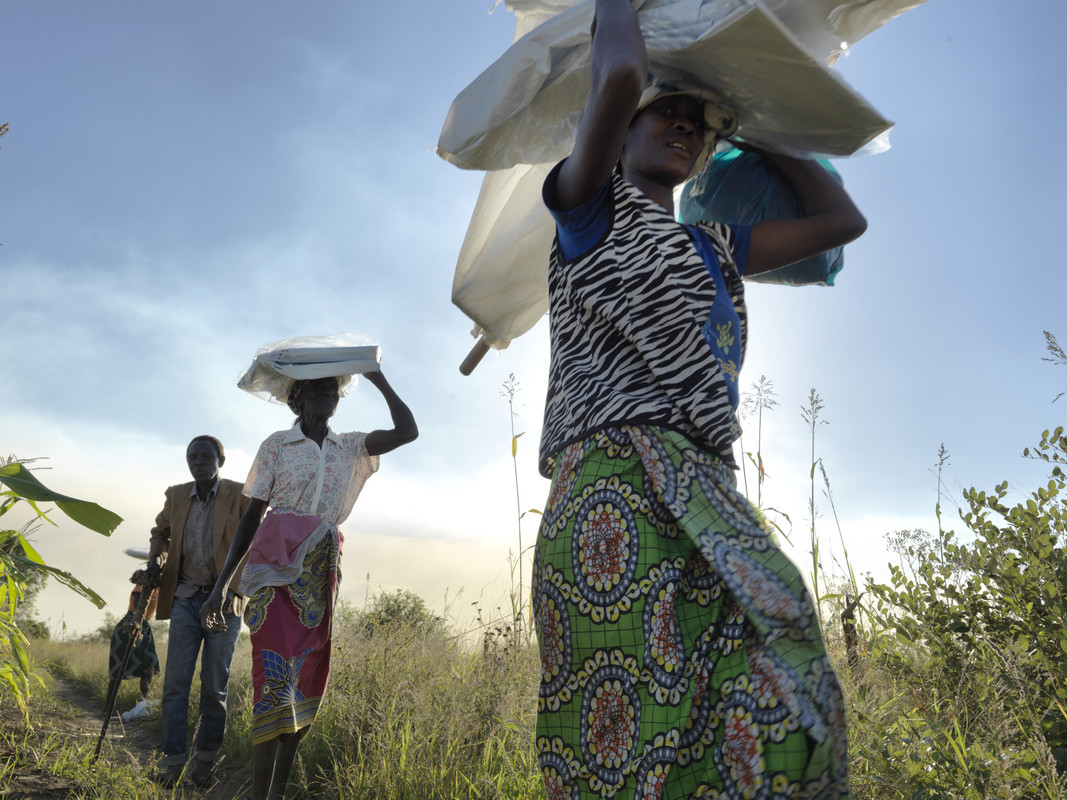 In March, Cyclone Idai tore through Mozambique, Malawi and Zimbabwe, killing over 900 people and destroying roads, bridges and buildings. Around three million people were left in desperate need of humanitarian assistance. Many people lost their homes, livelihoods and all their possessions and are now living in resettlement camps.

The DEC’s Cyclone Idai appeal which has raised £41 million to date, including £4 million in Aid Match from the UK government, remains open.  The scale of the crisis has been overwhelming but work to rebuild lives is well underway. Here are some of the ways your donations are helping people in the first six months of the response. 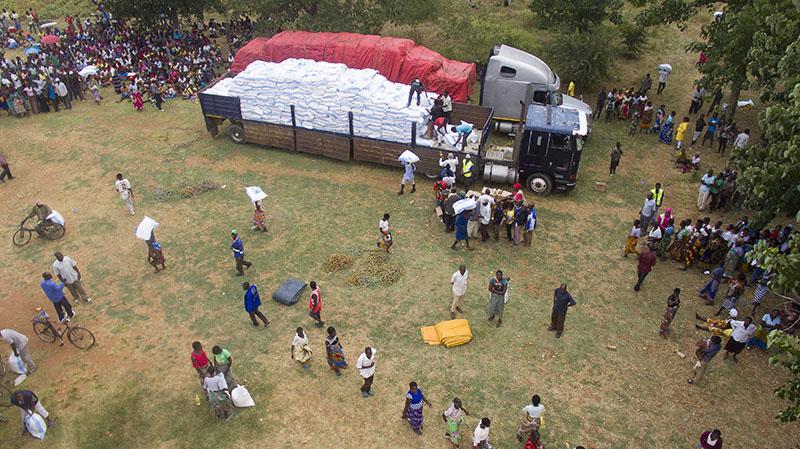 Following Cyclone Idai many people were trapped in treetops for days, with nothing to eat except rotten mangoes, while floodwaters swept away their homes and crops, right before harvest time. Immediate needs have mostly been met, but aid agencies are still struggling to reach and provide for everyone affected.

The World Food Programme has warned that almost two million people are facing hunger in Mozambique this year, largely due to food shortages caused by the cyclone and flooding. DEC charities plan to assist 40,500 people with rice, cooking oil, maize flour and beans, while families work to plant seeds and grow food for the future. 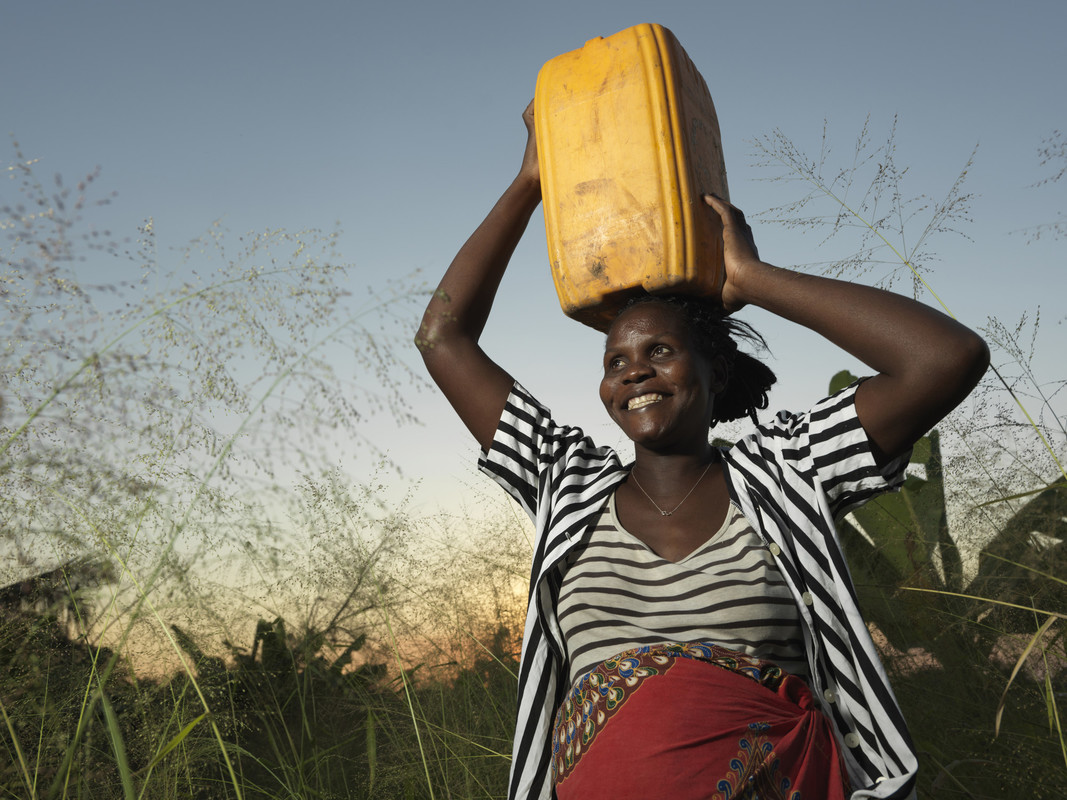 Tamara carries water from a waterpoint installed by World Vision near her house in Buzi, Mozambique which was completely flooded after the cyclone. Image: Peter Caton/DEC

Providing enough clean drinking water for the millions affected by the disaster has been a major priority. Strong winds and flooding destroyed water facilities and pools of stagnant water were created, resulting in a high risk of a cholera epidemic, particularly in Mozambique. Fortunately, as a result of a national cholera vaccination programme and efforts by international organisations to repair and provide water facilities and mobilise health education, the risk of cholera has been reduced to pre-cyclone levels.

In Buzi, Mozambique, the only source of water after the cyclone was the river which carried water-borne diseases and is inhabited by crocodiles. Now people like Tamara (above) use a waterpoint installed by World Vision which filters river water to make it safe to drink. 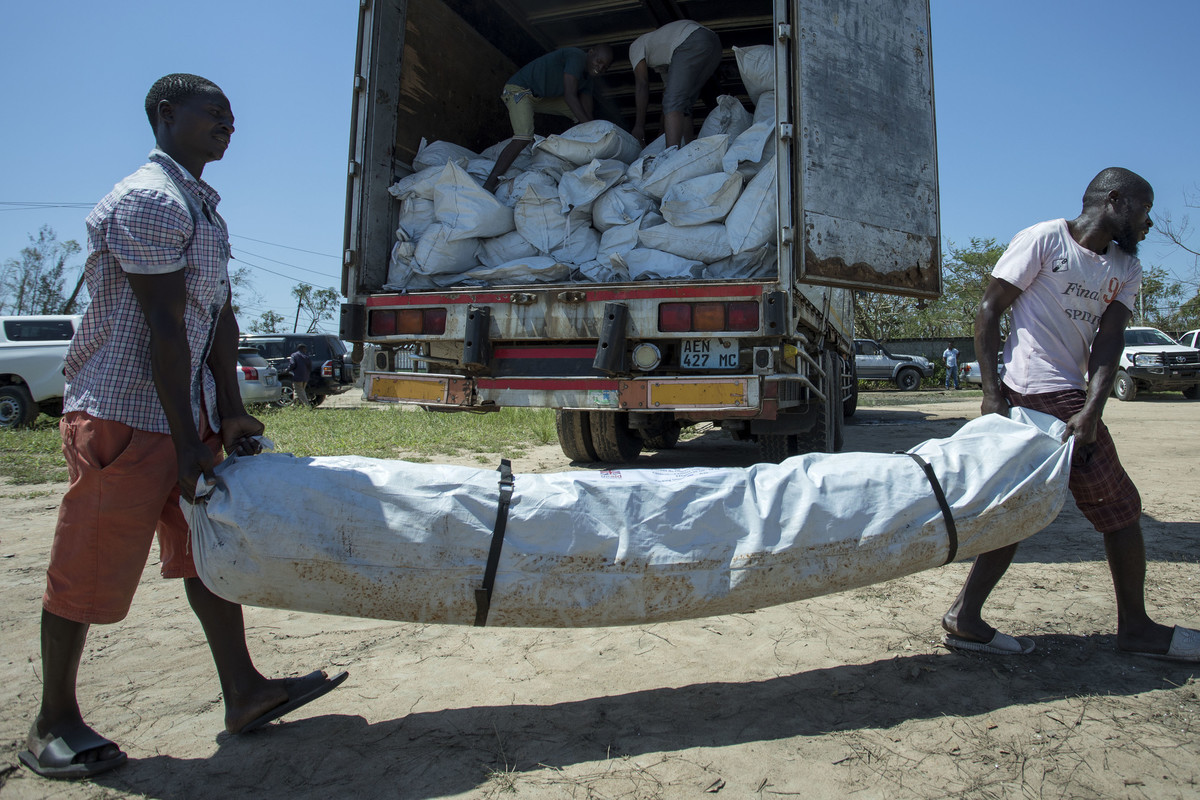 Across the three countries 185,000 people have been displaced, having lost their homes and all their possessions in the cyclone and the floodwaters that followed. In Mozambique alone, 80,500 people are living in 63 resettlement camps, built on higher ground.

Plans to support people in the camps, and beyond, include supplying 9,700 families with emergency shelter materials or vouchers for similar items and 22,200 families with household essentials such as blankets, mattresses and kitchen utensils. In some camps, DEC charities are constructing latrines on each family's plot of land. In total, they are aiming to construct and rehabilitate 1,700 latrines, including some especially adapted for people with disabilities.

4. By providing safe and learning spaces 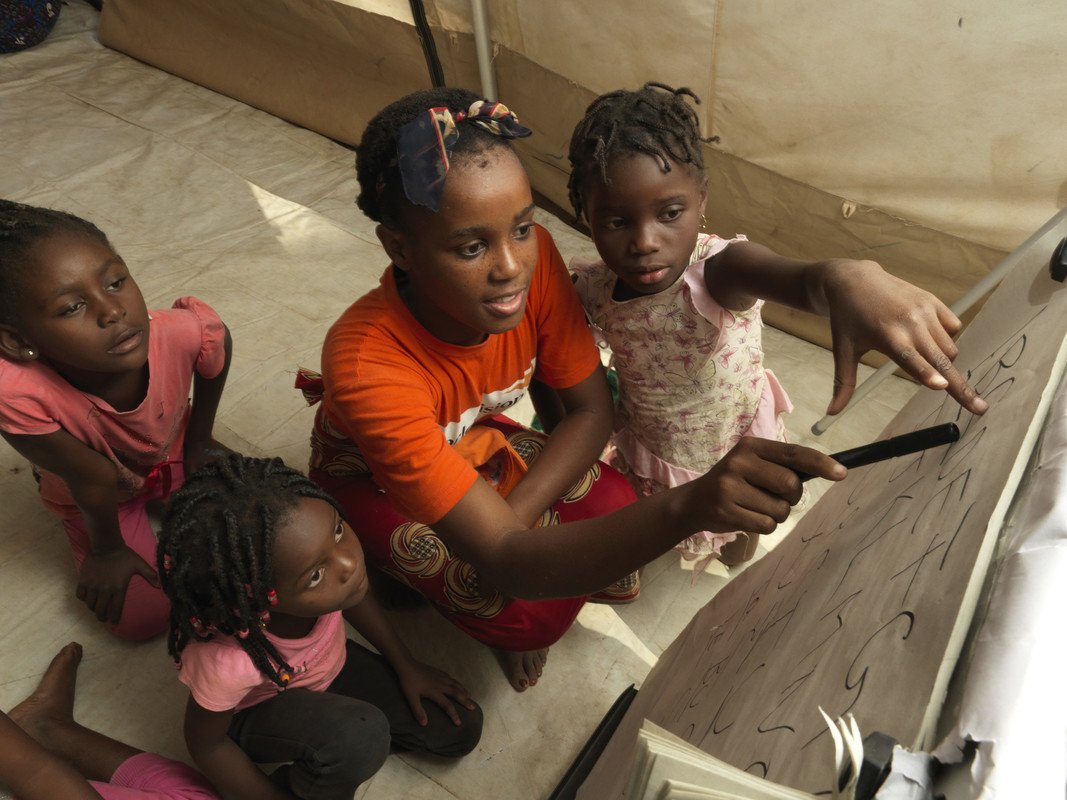 In most responses to disasters, DEC charities and their partners run safe spaces for vulnerable groups such as women and children where they can be protected, receive special support and spend time with peers. Plans are to establish 59 safe spaces for women and children, as well as 14 learning spaces to help children continue their education. Training is to be provided for 320 aid workers in Humanitarian Inclusion Standards, to ensure that older people and people with disabilities are given appropriate aid and that their special needs following the disaster are met.

"After the cyclone, children were stressed and traumatised," explains Simeao Malate, a child protection officer for World Vision who oversees Child Friendly Spaces in Mozambique. "This kind of work helps children recover, and it helps them to be prepared for another cyclone if one comes." 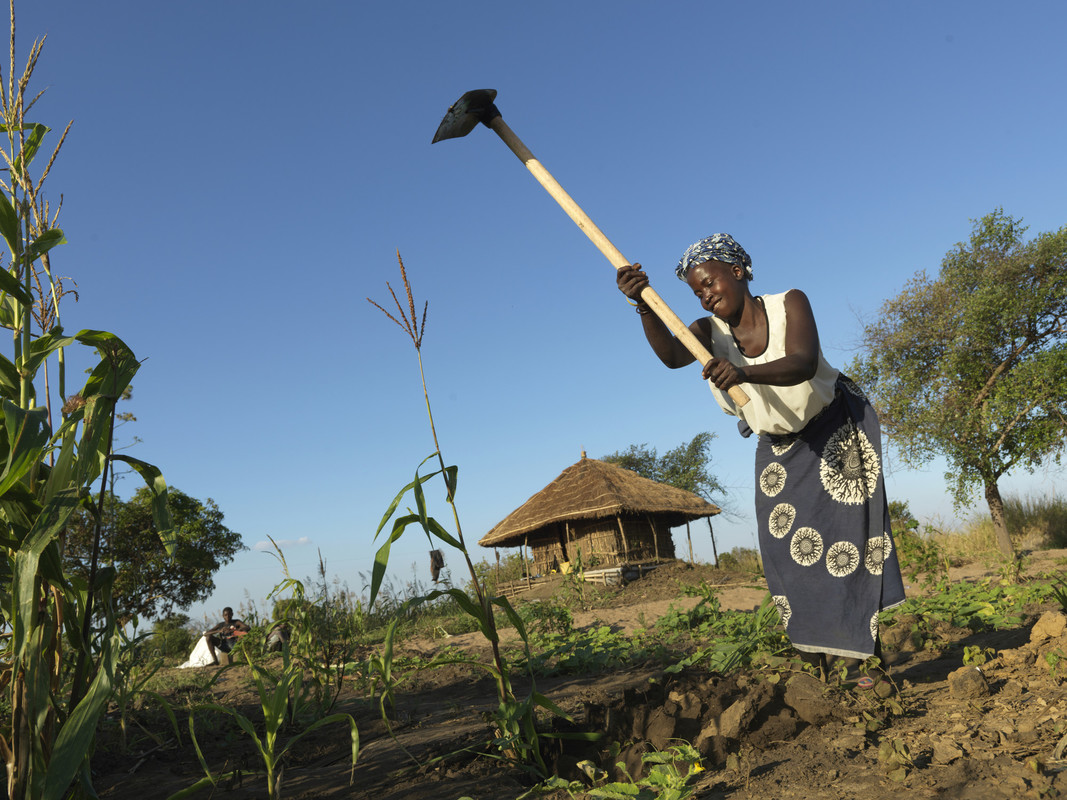 Luisa uses tools received from CAFOD to prepare her field for replanting. She spent four days in the treetops when floodwaters swept away her village. Image: Peter Caton/DEC

Cyclone Idai struck just before harvest time and caused widespread flooding which ruined crops across the region right before harvest time. A big focus now is to rebuild people's livelihoods to help make them independent again, with plans are to supply 22,700 families with tools, fast-growing seeds, distribute chickens and train people in chicken rearing. A cash grant scheme aims to help 11,700 families meet their immediate needs.

Luisa, pictured above, spent four days in the treetops as floodwaters swept away her village and all her possessions. "Everything was gone: blankets, plates, the house," she says. "It was all carried away by the water, so we didn’t even had anything to cover ourselves." She received tools from DEC member CAFOD and plans to use them to replant her field and dig a well to keep her crops watered. 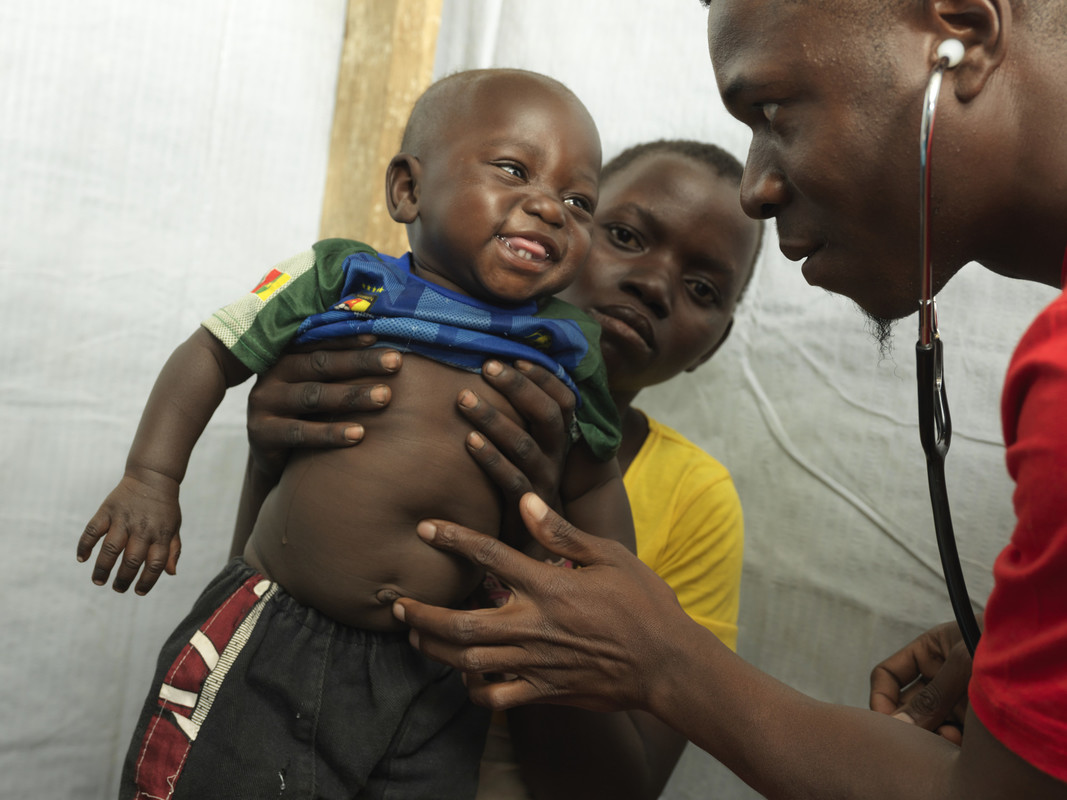 Alberto*, eight months, is examined at a Save the Children mobile health clinic in Mozambique. Image: Peter Caton/DEC

Work to restore clinics and health facilities destroyed by the cyclone is vital; DEC charities plan to rehabilitate 29 health facilities in the first six months, with 20 to receive cholera treatment kits and 10,500 people to receive treatment for malnutrition. With many people now living out of the cities and in remote locations, mobile health clinics are an important way to deliver healthcare to children and their families.

"It’s important for the clinic to be mobile so that we can help people," says Ana Paula Namalela, a nurse with Save the Children. "When people are sick, it’s really hard for them to get to the hospital."

"Right now, we are also getting a lot of skin complaints. There’s a lot of malaria and flu is constant as well," she added.

Aid workers from DEC charities and their partners are working hard to ensure that people who lost their homes, possessions and livelihoods in Cyclone Idai and the flooding that followed can rebuild their lives, but with thousands still living in tents and Mozambique facing food shortages, there is much more to do.

Our appeal is now closed, but you can find a list of our member charities with open appeals here. You can find our Cyclone Idai Appeal Six-Month Report here.