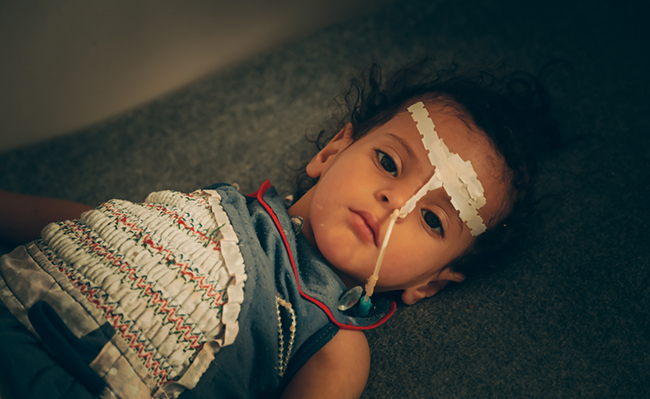 DEC charities have reached more than 1.3 million people in Yemen with DEC-funded aid since the appeal launched at the end of last year. The UK public has donated £24 million so far, including £5 million from the UK Government, helping boost the aid effort and get lifesaving help to people quickly.

The western strategic port of Al Hudaydah has been damaged in the conflict, severely restricting food imports and pushing up the price of essential goods. An international early warning system predicts heightened conflict could further limit imported food, potentially pushing the country into famine.

DEC charities are working in active conflict areas such as Taiz, Yemen's third-largest city, where increased fighting has pushed thousands to flee the city for surrounding areas. The sudden influx of people is stretching clean water and health services and increasing the spread of preventable diseases.

Damage to water and health systems has caused an emergency within an emergency with over half a million cholera cases reported since the end of April – more cases are expected as malnutrition grows, making it more likely that they will contract the disease.

Despite these challenges, DEC charities have reached more than 1.3 million people between December 2016 and July this year. They have provided more than 112,000 people with food and vouchers to purchase food. Another 56,000 people received cash or vouchers to help them buy essential supplies.

One Yemen partner organisation worked with a network of bakeries to provide bread to 87,374 people living in a hard-to-reach area of the country for 33 days.

In response to the cholera outbreak – more than half a million cases were reported between 27 April and 22 August – DEC aid agencies quickly reallocated funds to prevent and treat this highly contagious disease. They provided water purification tablets to families and helped with water chlorination in institutions and at large water distribution points.

More than one million people have been reached with clean water or sanitation services, such as hygiene kits, to reduce the risk of disease – of which 750,000 continue to access clean water through rehabilitated water pipes. Charities have also distributed oral rehydration sachets, trained health workers to prevent and treat cholera, and constructed solar-powered water systems in to remote parts of the country.

More than 154,450 people received medical consultations, treatment or health training, including  22,609 children who have been treated for communicable diseases or conflict-related injuries. More than 141,700 people have been screened or treated for malnutrition.

Back in the UK, the DEC and its member agencies continue to raise funds for the crisis, call for the ability to reach everyone who needs help no matter where they live, through improved humanitarian access, and urge all sides to bring an end to the conflict.