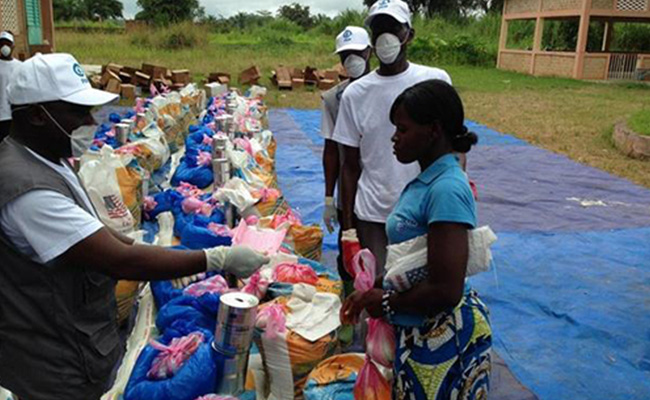 Member agencies of the Disasters Emergency Committee have reached over 8 million people in the fight to tackle the devastating Ebola crisis in west Africa.

DEC member agencies and their partners have supported over 415,000 people in their homes or health clinics with water, sanitation and hygiene services or supplies.  Partners of the British Red Cross have provided treatment for 143 people infected with Ebola, safely buried over 3,800 bodies of people infected or potentially infected with Ebola and have traced almost 50,000 people who have had contact with Ebola carriers so they could be quarantined, tested or treated. Members have also provided food to over 80,000 people, many of whom are living under quarantine.

Over 35,000 volunteers are getting life safe-messages across through street theatre, house to house information sessions and religious services, and members have also used radio broadcast to share life-saving information about how to avoid catching the disease, how to identify if a loved one might be infected and encouraging those infected to seek early treatment.

“For example, the fact that most of the dead bodies in Freetown are now being safely buried shows that we may be starting to turn the corner in preventing the spread of the disease. But we urgently need to provide more support for people living under quarantine and to ensure that everyone who displays symptoms seeks testing and treatment immediately.”

“Public health education will have an enormous impact on the population of Sierra Leone and Liberia where literacy rates are extremely low. We are playing a major role in challenging the myths and the lack of understanding around the disease. And this in turn is helping to save lives and limit the spread of the disease.”

Members are also providing significant support to the already fragile health services struggling to cope with this unprecedented outbreak. This includes training or supplies, including protective equipment, to 6,554 health workers.

Member agencies and their partners have also provided psycho-social support to 4,459 people who have been affected by the devastating consequences of infection.