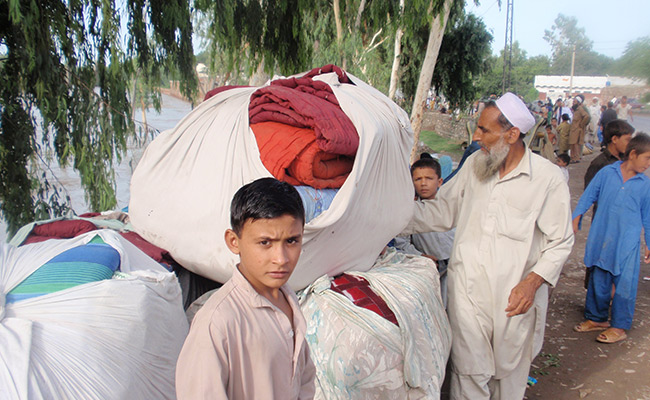 More than 12 million people saw their homes damaged or destroyed during the emergency, in which flooding  in the northern province of Khyber Pakhtunkhwa (KPK) spread south down the Indus river through Punjab, Balochistan and Sindh.

People also faced acute food shortages after 450,000 farms animals were killed and huge amounts of grain were lost as 17 million acres of Pakistan’s most productive farm land were submerged.

Huge amounts of grain were also lost as 17 million acres of Pakistan’s most productive farm land were submerged.

Humanitarian agencies, local government and the UN coordinating body, the Office for the Coordination of Humanitarian Affairs (OCHA), were stretched to capacity as they worked to respond to the disaster in which many hospitals, clinics and schools were also destroyed.

Member agencies provided relief to an ever-increasing number of people in need over an increasing area as flood waters worked their way south through the Indus and other river systems from the mountains in the north-west.

Shelter, essential household items, water and sanitation facilities were set up as fast as possible, but the scale of the disaster meant it was not possible to reach all those in need.

Medical charities also set up mobile clinics to treat water-borne diseases and provide support to the clinics and hospitals that remained standing.

Within six months more than £16m of the £41m of funds raised directly by the DEC had been spent helping nearly 1.8 million people.