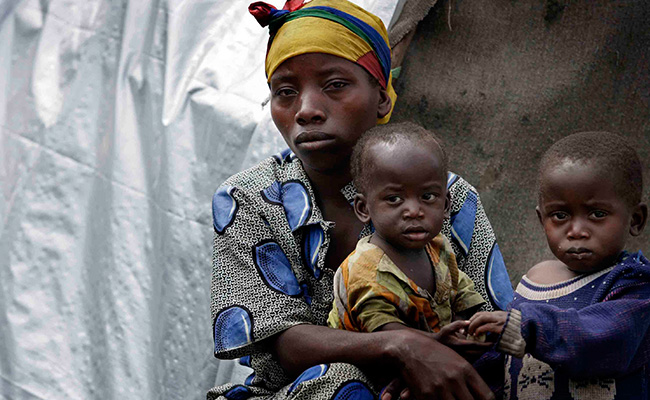 "I am 20-years-old and have four children. I have come to this camp from Ruhmangabo because of the war - things had got very dangerous there because of the soldiers and fighting and I was worried for my children.

My husband is still alive and we came together, but he has had to go and stay in Goma general hospital because he has very bad malaria. So now I am living in this small hut with my four children, alone until he is well enough to come back. I had my first child when I was 16 years old, one year after I got married and I have had a child every year since then.

We are originally from Bukeno and were displaced from there about a year ago to Rughmangabo because of the war. So when we moved here to Goma it was the second time we have been displaced in a year. Both times we have fled we haven't been able to bring anything with us because we always fled on foot and all we could carry was the children; so when we arrived here we had nothing - no shelter, not pots, clothes or buckets for water. When we arrived a month ago we were given some plastic sheeting and also we get food once a week, but this week it hasn't come yet so now we haven't eaten since yesterday.

I have heard that CARE are doing a distribution later today but I don't know what they are going to bring. I have to borrow things to fetch water in, and what I would really like is some new clothes so that I can wash the clothes that I am wearing, and wash what the children are in. When it rains here we can get very wet - the shelter we are living in isn't very waterproof.

All I really want to do is go back home, but I know that there is probably nothing left there for us now because the soldiers will have taken it all. I am very worried about my husband and his sickness - I don't know what I would do if he died. My four children are all very young and I am scared of the war."