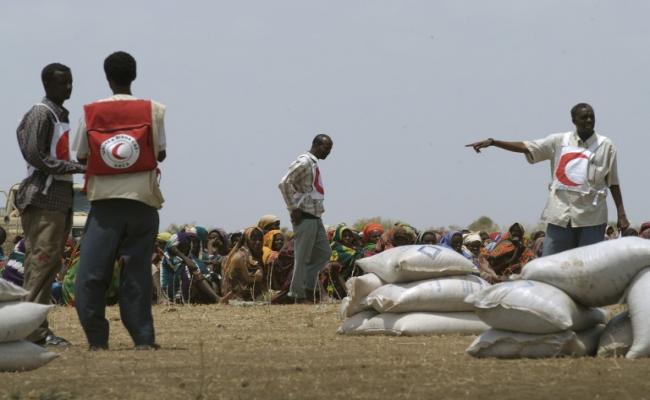 The International Red Cross and Red Crescent Movement has been able to distribute life-saving food aid in areas of Somalia suffering from famine.

The International Committee of the Red Cross (ICRC) and the Somali Red Crescent are completing emergency food distributions to over 160,000 people in drought- and conflict-affected areas of the country.

In recent weeks, the British Red Cross released a further £500,000 to support the aid operation, bringing to £1.25 million the total provided by the organisation for Somalia in the past two weeks alone.

Through the ICRC and the Somali Red Crescent, aid bought by the British Red Cross is able to reach areas of Somalia that remain off-limits to many other agencies.
Expanding feeding programmes

“People in Somalia are desperate for emergency food aid, and the ICRC and Somali Red Crescent are able to get through to deliver it,” said Barry Armstrong, British Red Cross disaster response manager.

“With the growth of the crisis, feeding programmes in Somalia have been expanded and, thanks to donations to our appeal, we’ve been able to step up funding to support them.”

The £500,000 will fund the purchase and distribution of almost half a million kilos of food – enough to feed thousands of families.

In the face of the growing crisis in Somalia, the ICRC has announced it is opening ten new feeding centres, providing additional mobile teams to visit the worst affected areas and launching a new feeding programme for malnourished children under five and other vulnerable groups, such as pregnant women and new mothers.

The Red Cross is responding across east Africa to the current emergency, and has been working in the region for years to prevent crises before they emerge.

“Emergency food aid is the option of last resort. It is desperately needed now to save lives, but it does not solve any of the underlying causes,” added Barry.

“One thing which has made a long-term difference in areas of Kenya is helping people strengthen their livelihoods, which can help them withstand future crises.

“But this kind of resilience work needs to begin long before a crisis arrives.”