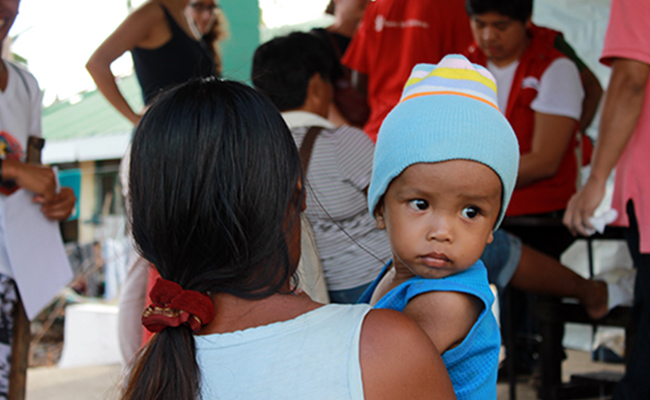 Angelito, only 14 months old, has been diagnosed with severe pneumonia.*

One month has passed since Super Typhoon Haiyan ripped through the Philippines flattening villages to the ground and turning people’s lives upside down.

A disaster of this scale has never been seen before by the people of the Philippines. They’ve been through enormous pain, many have lost loved ones, and have come back to homes that are unrecognisable, or completely torn apart. Over 5,500 people have died.

But the emergency response to this catastrophic disaster is far from over.

Committed to saving lives, Merlin and Save the Children responded immediately, putting the needs of vulnerable people first.

How we've helped so far

To treat people suffering from serious injuries, our Emergency Medical Specialist Team, deployed within a week of the response, have given urgent medical help to hundreds of people, like young Alisa. Another part of the team of medical specialists went on board HMS Daring travelling from island to island around the North East coast of Panay giving essential medical assistance to people in more remote areas.

Four mobile health clinics are up and running in Panay, Leyte and San Jose taking vital healthcare directly to those cut off from health services. We have reached over 800 people so far, and six more clinics will be delivering primary health care in other areas of high need.

And to help the health system get back on its feet, we’ve also been supporting existing clinics that have run out of medical supplies and are overwhelmed with high volumes of people needing urgent medical attention.

With four million people now homeless, and over a million homes destroyed or damaged by the typhoon, people have little choice but to take shelter wherever they can find space.

They are scattered throughout schools, temporary shelters, ad-hoc evacuation centres, or with family. But these spaces are often cramped, very overcrowded and unhygienic.

Poor living conditions combined with the prolonged rains, are making the spread of disease throughout communities difficult to control. People’s lives are at risk, especially children.

Merlin and Save the Children are working hard right now to protect people and reduce the spread of deadly diseases. We have started a mass measles and polio vaccination campaign to keep people healthy and safe.

Children are the most vulnerable

Dr Miguel Dorotan, who has led one of the mobile health teams in Dulag, an area badly hit by Typhoon Haiyan says, “So many of the children we see are showing signs of respiratory diseases or pneumonia”.

Angelito*, 14 months old, is one of these sick children, staying at a village school with 60 other families. He fell sick three days after the storm, and has been diagnosed with severe pneumonia by Dr Dorotan. Straight after the diagnosis, Angelito was referred and taken immediately to a rural health centre, accompanied by one of our health workers, and given urgent treatment.