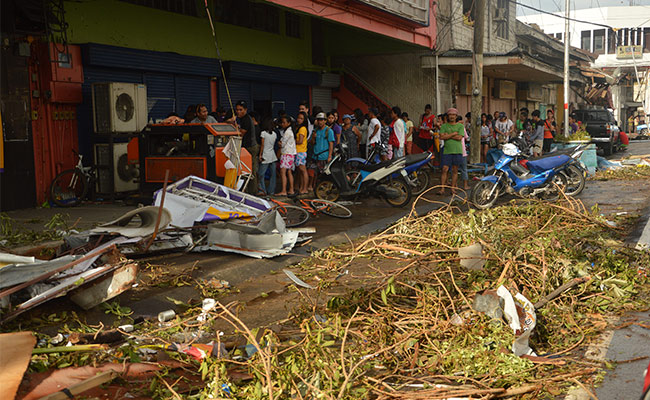 Cebu, World Vision has been distributing food and hygiene kits to people in the remote villages in the hills of Tabugon.

As the Disasters Emergency Commitee (DEC) announces that more than £44million has been donated for those affected by the typhoon in the Philippines, stories are coming through from those desperately putting their lives back together.

Roads blocked by large amounts of debris from fallen buildings and trees makes access to communities in many areas incredibly hard to reach.

However, agencies on the ground including Oxfam, the Red Cross and Save the Children, are working with communities throughout the devastated archipelago to deliver vital aid, including water, food and sanitation supplies.

Hygiene and water purification kits were given to 600 families over the weekend by Oxfam in the coastal region of Daanbantayan, which was badly affected by the typhoon.

The hygiene kits contained essentials such as blankets, sleeping mats, mosquito nets and toothbrushes and paste.

Sonia Tidoni, 32, with her ten-month-old son, was among those residents who received the kits.

She said: “When the storm hit, we went to my aunt’s house which is made of cement but even that was destroyed. There was so much debris flying around especially the roofs that had blown off. We were also scared about the falling coconut trees.”

Another resident, Annie Postrero Abenasa, 31, who lives with her husband Christopher Abenasa, and their three children, an eight-month-old boy and two girls, aged two and three, said she is still struggling to understand the enormity of what happened and desperately needs help.

“We are still in shock. I don’t know how to react, how to overcome this kind of damage. On that day, all the rooftops were blown away, all the houses damaged,” she said.

Annie added that the water and hygiene kits would be useful for her family: “It’s a great help to us because we have nothing. Everything in our house was blown away.”

Helping families whose homes have been destroyed

In northern Cebu, World Vision has been distributing food and hygiene kits to people in the remote villages in the hills of Tabugon.

Cyrah Mae, 4, is among those who have received support from World Vision. Her mother, Maria Theresa Itang, also has a child, Ella who is four months old. Their family’s home was destroyed in the storm. “Since then, we are living in the high school; it is very far from here. “

Christian Aid is also delivering aid in the region.  Nick Guttmann, Christian Aid’s Head of Humanitarian Division said the charity had visited a number of villages along the coastline and inland from Ormoc.

“We’ve spoken to several people who have seen their homes destroyed, yet are always greeted with a smile, then often a tear. Everyone is doing what they can to piece their lives back together.”