Haiti: 5 years on from the earthquake 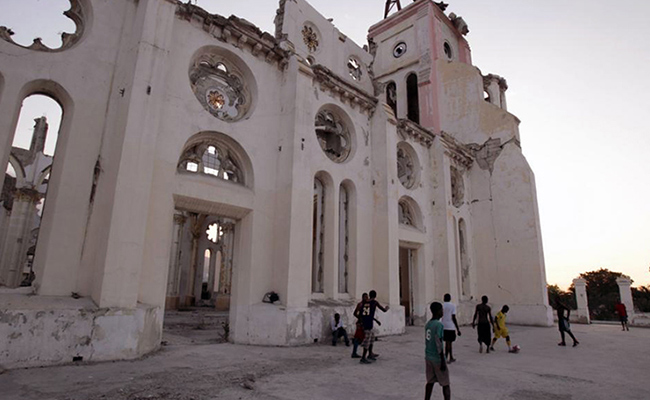 Children play football in the ruins of Notre Dame Cathedral, Port-au-Prince. This photo was taken two years after the earthquake.

Five years ago when Haiti was hit by a devastating earthquake. 1.5 million people lost their homes, 230,000 people were killed and another 300,000 were injured. Concern Country Director for Haiti, Peter McNichol, reflects five years on from the devastating event.

I wasn’t here at the time of the earthquake in 2010, but I have spoken with many of my colleagues and each one has an irrefutable and exact memory of the events. No one was untouched.

As we look towards the fifth anniversary of this horrific event, it is important to see what has been achieved. Haiti was already recognised as the poorest country in the Western hemisphere when it faced an event that would cripple even the best prepared country.

Would we cope better in the UK, US or Ireland? I am not sure how we would fair if our major airports closed, 60% of government buildings were destroyed and over 300 hospitals badly damaged.

At the time of the earthquake, I was in the Democratic Republic of Congo (DRC). I had been there for a year and during that time had worked with Gardy, our IT manager. I would often see him in the office on a Saturday, keeping things running. Gardy’s family were back in Haiti so once he’d finished in DRC, he had headed home to be with his wife and newborn child. Then the earthquake hit. The news came pretty quickly, news so many families were receiving. Gardy was dead.

I have worked for Concern for 18 years and I recognise how people can tire of the requests to give money to charity.  But as I saw events unfold on TV and heard about the loss of Gardy, I wrote to my family and asked, for the first time, for each of them to give what they could.

Since those donations flooded in, there have been questions raised about aid provided to Haiti. It is healthy to question and charities should rightly be held accountable for the money we spend. (Find out more about how Concern spends donations.) It’s also important to bear in mind the complexities of Haiti and number of disasters the country has faced in recent years. In the same year Hurricane Sandy hit New York, it also hit Haiti. In this same year, they had to deal with another tropical storm, in addition to the world’s largest outbreak of cholera and the after effects of the earthquake. These multiple disasters had to be dealt with on a fraction of the budget available to more developed countries.

Taking all this into account, significant progress has been made. This is due in large part to the resilience and willpower of Haitians who stood up and reacted to the hand they were dealt. The relatively young government, while having its challenges and weaknesses, is striving to improve things and realise Haiti’s potential.

Drive through Port au Prince, the nation’s capital, and you can still see buildings affected by the earthquake if you try, but you have to really look. Millions of tonnes of rubble have been removed and 1.4 million people have left the camps that provided them with shelter following the quake. This is something Concern worked hard on. We gave 7,000 families rental support for a year while helping them re-establish small businesses. In 2011, 1,500 homes were built and handed over to people from the camps.

Haitians, with the support of the international community, are reconstructing their country. Through all of this there are other signs of success. Rates of malnutrition have actually fallen over the last five years, there are more children in school and Haiti’s economy is growing – so something has to be right. This is not to understate Haiti’s challenges. Significant improvements have been achieved but continued support is required to sustain real change. At the time of this anniversary, Haitians should be saluted for what they have achieved, and their impetus to move forward.