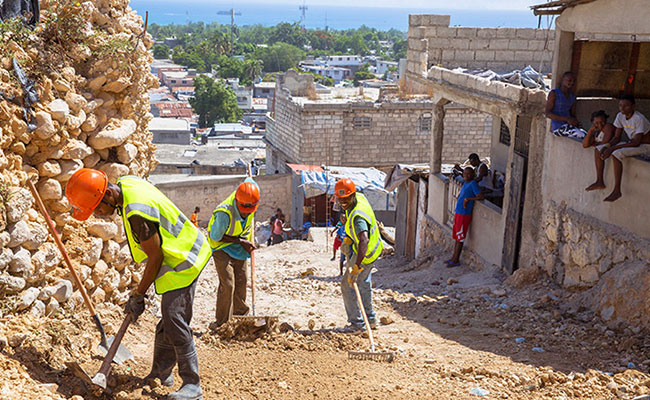 Five years after the devastating Haiti earthquake killed more than 220,000 people, close to 1.4 million out of the 1.5 million displaced are no longer living in makeshift camps.

However far too many Haitians continue to live with in the aftermath of the unprecedented disaster. Last September more than 85,000 people were still living in 123 camps, many facing the risk of eviction.

Tragically Haiti remains one of the most unequal countries in the world with the richest one percent owning the same wealth as 45 percent of the poorest population.

Such dire conditions must make us all stop and ask questions about the emergency response that was launched within 24 hours of the destruction of the capital Port au Prince. However given the huge challenges facing both the Government and humanitarian agencies, a massive lifesaving emergency response was launched achieving a great deal.

For example in the first year of the emergency response, the UK public helped provide:

The recovery effort beyond the initial lifesaving phase has faced many challenges. Before 2010 the conditions in Port au Prince were in such poor state, with most people living in overcrowded slums, that the UN was calling for “Master Planning” to reduce the risk of disaster.

Former UN Emergency Relief Coordinator John Holmes wrote this week: “No one wanted just to patch up the awful status quo ante. But this almost immediately ran into a second also highly desirable principle, that of a Haitian-led reconstruction operation, not an internationally-imposed blueprint.”

The shortage of land for new homes, stalled reconstruction plans and weak government all made it harder for the national and international leaders and aid agencies to work together towards the same goal. Donors were reluctant to channel funds into large-scale reconstruction without a plan, instead tending to rely on humanitarian agencies to address huge challenges without much-needed strategic vision. As a result many of the housing problems that existed before the earthquake remain today.

A member agency is tackling the huge problems of land tenure and lack of space by finding housing alternatives. A family living in a camp partners with a homeowner whose house is damaged. In exchange for financial and technical assistance to repair their houses, homeowners agree to host the family rent-free for 12 to 24 months. Homeowners manage structural repairs, purchasing materials and hiring local workers with training and supervision from experts.

Before the earthquake, Haiti was, and remains, the poorest country in the Western Hemisphere. But a report released last month by the National Observatory on Poverty and Social Exclusion (ONPES) and the World Bank shows extreme poverty declined from 20 to 5 percent in the Port-au-Prince area between 2000 and 2012.

Haiti: Investing in people to fight poverty said the biggest gains have been in access to basic services have been in education, where school participation rates have risen from 78 to 90 percent.

It credits progress to an increase in better paid jobs in construction, transport and telecommunication, particularly in the Port-au-Prince area, as well as large flows of remittances and international aid.

The DEC members recognised the opportunity to garner the potential of Port-au-Prince early on, working with local food vendors and petty traders to provide people with what they needed and invest in the local economy.

Total earthquake-related loss was estimated at $7.8 billion, equivalent to more than 120 per cent of Haiti’s 2009 gross domestic product, yet today the country’s economy is actually growing.

It is tough to admit that the lifesaving work providing shelter, healthcare, food and water after a massive disaster is an emergency service that does not solve all the underlying poverty and inequality that existed before the crisis. This is especially true for countries prone to disasters  – Haiti has faced a cholera epidemic, hurricanes and drought since the earthquake, making recovery that much harder every time.

DEC agencies have continued to help communities prepare for the next crisis. For example they provided technical and business training to tradespeople involved in construction, including training carpenters to build earthquake and hurricane resistant buildings.

Although government buildings were destroyed and hospitals badly damaged five years ago, Haiti’s health service has managed to make progress in controlling the cholera epidemic since the 2010 outbreak with case numbers decreasing from approximately 185,000 in 2010 to 21,000 in 2014.

In the first six months after the earthquake our member agencies used the generous donations from the UK Public to reach 1.8m people with emergency aid and they continue to advocate for and work with communities in Haiti.

Such successes do not make this a good news story. The fact that more than 30 people are infected by cholera every day is appalling and demands urgent attention.

Five years on we remember those who lost their lives, the challenges that continue to hamper the recovery of Haiti – and recognise the communities, Haitian businesses and aid workers who have helped one of the poorest countries in the world change slowly and gradually for the better.