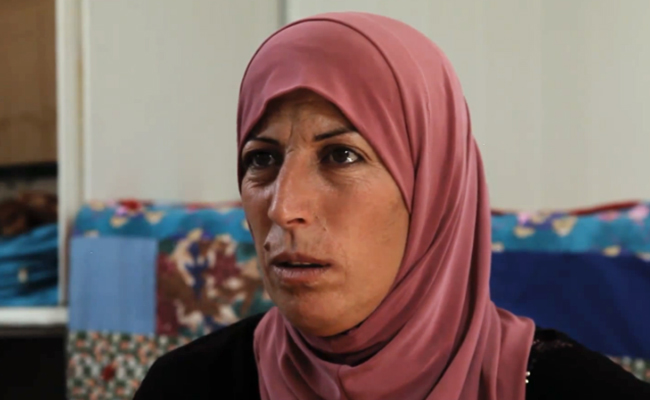 Um Jamal, one of many Syrian refugees DEC Syria Crisis Appeal funds have been helping.

Funds donated to the DEC paid for aid to be delivered to 129,000 people in the first three months after the Syria Crisis Appeal was opened on 20 March 2013. Over 80% of the people helped (108,000) were inside Syria, with aid being provided mainly by DEC member agencies working through partner organisations. Those helped have come from all affected communities and across Syria.

Inside Syria more than 42,000 people have received food and over 28,000 have received hygiene kits, with some receiving both as part of the same distribution supported by a DEC agency. The agency has asked not to be named to safeguard their partner and the work they are doing. Save the Children have used DEC funds to support a partner organisation to improve sanitation for some of the people worst affected by the conflict. They are cleaning the streets of debris and maintaining a hospital sewage system in an area which undergoes heavy shelling and is often sealed off due to fighting.

Within the last three months, an additional 25,750 people inside Syria received family food parcels from the Syrian Arab Red Crescent with support from the Red Cross using DEC funds. The delivery of these parcels is ongoing and a total of 72,500 people are expected to have received help by the end of September 2013. CAFOD is working with church partners to deliver food parcels to help a further 5,000 people.

Other aid delivered inside Syria and paid for with DEC funds during the first three months of the response has included:

Across the region member agencies have also used some DEC funds to assist refugees by providing:

Six months after the DEC Syria Crisis Appeal was opened on 20 March 2013, the total raised has now reached £20m - £9.6m was given to the DEC itself and £10.4m was given directly to our member agencies. This is an important milestone and the DEC is extremely grateful to the UK public for their generous support.

Sadly since the launch of the Syria Crisis Appeal the situation in Syria has deteriorated significantly and the number of people forced from their homes as a result of the conflict has surged from three million to over six million people. Typically DEC appeals remain open for six months but because of the exceptional situation in Syria, the DEC has taken the decision to extend the fundraising period until the end of December 2013.

DEC member agencies are continuing their aid to the Syrian people and we will continue to provide a way for people to support that work.