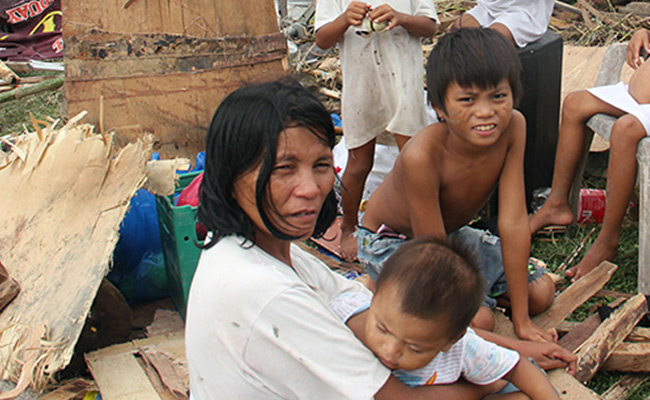 Family of survivors, Philippines. Photo: Save the Children

Typhoon Haiyan has devastated large parts of the Philippines. It’s thought to have been the strongest typhoon ever to hit land. Around 4.3 million people living in the path of the storm have had their lives torn apart and countless people have died.

The humanitarian impact is thought to be massive, with the homes of hundreds of thousands of people destroyed or severely damaged. The destruction will also have a huge impact on families’ livelihoods and businesses.

Power and communication lines are down in many parts of the country and roads are impassable, with many airports out of action. The main aid priorities are food, water and emergency shelter.

Several of our members – made up of the UK’s leading aid agencies - are already on the ground undertaking assessments and responding to immediate needs.

But there are still huge challenges. The DEC urgently needs funds so that our member agencies can respond and help those affected re-build their lives.

Just £25 you can pay for water purification tablets for 10 families for a month. £50 will feed a family for two weeks and £100 will help to provide emergency shelter and bedding for one family.

Eyewitnesses say the devastation in Tacloban city, one of the worst affected areas, is reminiscent of the Boxing Day tsunami. The city is without food, water and electricity.

The Philippines President Benigno Aquino has declared a state of national calamity.

Millions of people have endured terrible conditions during and after the storm including children like Hannah, aged nine. Her father took her to a government building before the storm, but the violent winds shook the windows and water began to fill the room.

“When I saw the roof being ripped by winds, I thought it was my last chance, I told myself it would never end,” she says.

Hannah and her family survived but there are thousands who have not been so lucky.

The typhoon hit the Philippines on Friday, November 9th, with strong winds and gusts of up to 275 kph. It came less than four weeks after a 7.2 magnitude earthquake struck the island of Bohol causing extensive damage to infrastructure.

DEC members are on the ground mobilising their relief operations and urgently need funds.

* note that estimates of the number of people affected have increased significantly since this update was published.  Early estimates of the death toll that have since been revised downwards have been removed.