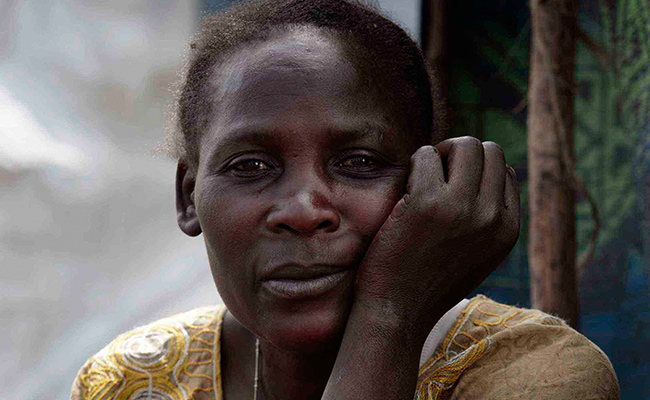 "I am 41 years old and I have come here from Ruhmangabo by foot. We came nearly one month ago now - me and my three children.

I had nine children in total but six of them were killed in the first war seven years ago now, along with my husband. Soldiers from one of the rebel armies came to our village and killed them, after looting everything that we had.

When this war started I was very scared when I realized that the same levels of violence and fighting could happen again, so I fled with my three children to Goma as soon as we could. At least here I feel safe, and don't think the soldiers will come like they did before. This is the first time I have been displaced though, other families in this camp have had to move many times, but for us this is the first. Although I wish now that I had left Ruhamangabo the first time the war came, because then maybe the rest of my family would have been saved. When we left I couldn't bring anything with us because I wanted to leave quickly.

The journey to Goma also took us nearly three days by foot, and we couldn't have carried much all of that way. At the moment I am borrowing pots to cook in and we are living in a shelter made of a plastic sheet that we were given. It is OK, it keeps out the rain most of the time, but sometimes it leaks if the rain is very heavy. We sleep on the floor, with only some Pangas (pieces of Congolese cloth) to cover us at night. It can get very cold, but at least we have each other to keep warm. My children are 15, 12 and 7 years old. The two oldest were going to school in Ruhmangabo but since we arrived here there is no school for them. I would like them to start studying again, but it is hard because there is no school here for children who have been displaced.

I am worried that if they stay out of stay out of school they won't remember things. My biggest need at the moment is clothes for all of us, we only have the clothes that we left in. I also would like to have a better shelter than this that doesn't leak when it rains because I am worried the children may get sick if they get wet and cold. We are receiving food help - we get two cups of beans a day that is enough to feed us, but we are still hungry sometimes and I have no money to buy other food. My biggest wish is to go back to Ruhmangabo when the war finishes, but we don't know when that is going to be - there is still fighting and I wouldn't feel safe. I also don't think that the soldiers would have left anything in our house - I heard that nearly everything was looted, but at least it would be a house and a place I know"