Cyclone Idai: 'Families are living in the husks of what is left'

Claire Rogers, CEO of World Vision Australia, was in Beira, Mozambique, where Cyclone Idai destroyed as much as 90% of the city. Littered with broken trees and damaged buildings, the Mozambican city of Beira looks like a war zone – but it’s a testament to its citizens that the clean up after Cyclone Idai has begun.

When I first arrived, it felt like some sort of beast had been on a rampage. In fact, on the flight into the disaster zone an evacuee returning to the city described the demonic noises he experienced as the wind tried to rip the doors and shutters off the house. It made a chilling entry to Beira.

Children, who should be in school, have been helping to shift the detritus that lies among the ripped down telephone and power poles. This catastrophe has killed hundreds of people and displaced tens of thousands across southern Africa. The final death toll is likely to climb.

Without an urgent improvement in the sanitary conditions it is only a matter of time before water-borne diseases spread, potentially killing more children. The biggest concern is for an outbreak of cholera, which is caused when faecal matter corrupts the drinking water. It’s deadly and spreads easily in crowded situations like displacement camps. Cases have already been confirmed in Beira. Malaria is also a real risk as mosquitoes lay their eggs in standing water and multiply. Malaria is already endemic. With health centres and hospitals damaged, a second humanitarian catastrophe of sickness and death is a real risk. 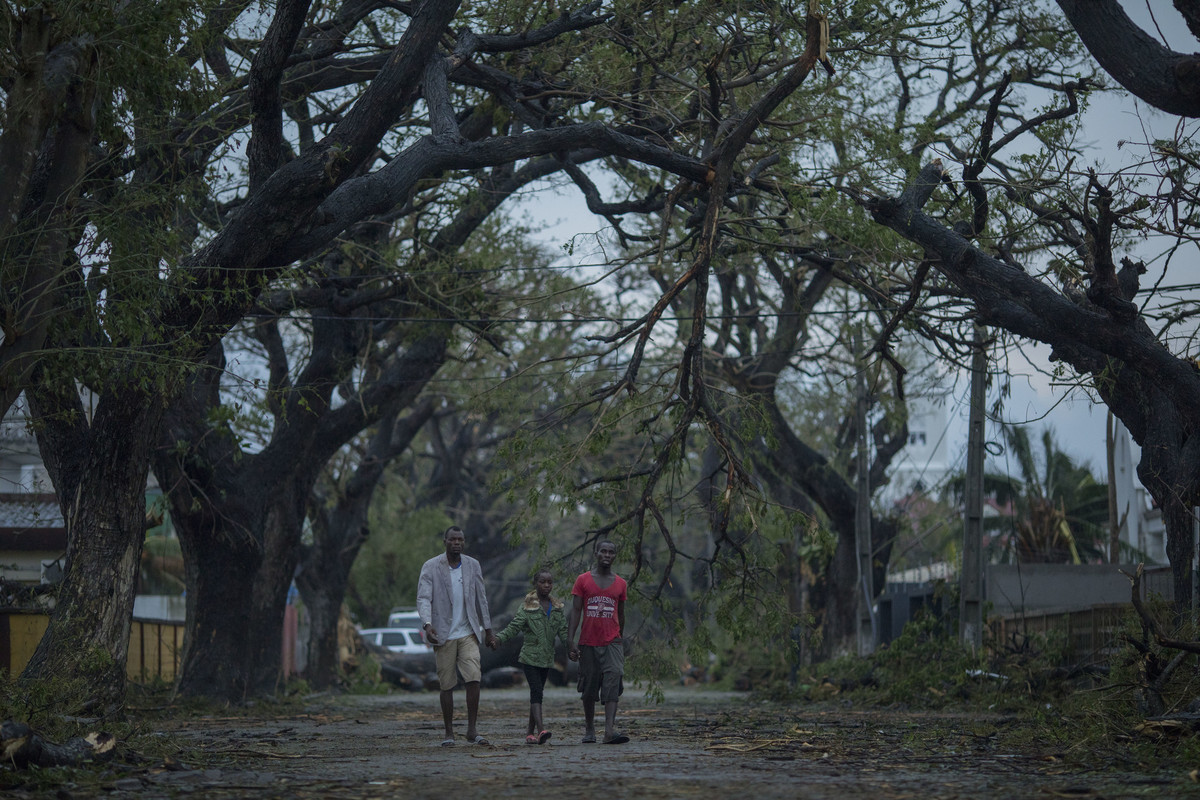 People walk down a damaged street in a residential area of Beira, Mozambique after Cyclone Idai hit the city. Image: Josh Estey/CARE.

Despite the threats, people are doing what they can to clean up, often with limited access to building materials which the poorest cannot afford. Chainsaws can be heard all around, and in the poorer shanty areas survivors are taking the ruined debris of their buildings and using what they can rescue to make repairs.  But it is going to take months to fix the health centres, hospitals and schools that have been torn apart. Families live in the husks of what is left.

I visited one city school where hundreds of people – largely women and children – were sheltering having been displaced. They were crammed into four or five classrooms, sharing just a few toilets. It’s a very difficult place for a family to feel safe.

Aid organisations and the UN are ramping up the delivery of assistance with cargo planes bringing aid from international warehouses, the capital Maputo and elsewhere. Ships are also moving goods into Beira port. The international aid effort is in full swing. The big drive now is to feed the aid out into the urban and rural communities where people have been patiently waiting for support.

Up until now helicopters have been delivering packs of high-energy biscuits to families in remote and broken settlements. Now that the roads have reopened and the floodwaters have gone down, aid is able to reach remote communities at a much larger scale.

As often happens, these crises push the very poorest into absolute poverty and break any chance they might have had of escaping it. The cyclone and floods destroyed the crops that poor communities hoped would feed them through the next few months. The aid community is going to have to support thousands of families to get them through this difficult time, and provide the financial or agricultural assistance to allow them to buy seeds and re-plant.

World Vision and so many other agencies are working around the clock to ensure that we reach those affected by the devastating cyclone and floods, and to prevent a second health-related humanitarian crisis.

If we don’t act now, more people will die and children will lose their chance to get back on their feet.

World Vision is among 14 organisations that have launched a joint appeal under the Disaster Emergency Committee (DEC), which brings together leading aid agencies at times of crisis overseas. If you wish to donate, please click here.